spam on my blog

Pfff today the first spam in the comments of this site passed through "the meshs of Mollom's net" :-(

I was a bit too optimist on my last post about swfdec and firefox. It seems that amfphp (at least the browser) is not workig with that flash plugin. So I re-installed the flash-plugin of adobe. Tip : I had to install nspluginwrapper but both architecture 32 and 64 bits packages. Then I ran

Today I moved to Fedora 9. First impression : It seems nice, it's fast. The only bad point is the quality of the graphics rendering during the installation, on my Intel Corporation Mobile GM965/GL960 Integrated Graphics Controller, the buttons and the text fields were not complete :( I'm using now swfdec for flash in Firefox and it's ok with nba.com so I'm happy. I find also nice that to enable a flash animation a click on it is needed, I hope it safes some cpu usage ;) As usually, when I install a new Fedora, I always do a fresh install. I found two nice projects that helped me in my task to recover my login and passwords : - password exporter (for Firefox) : http://code.google.com/p/passwordexporter/ - GNOME Keyring XML Import/Export Library (for all my gnome applications using keyring) : http://www.seekline.net/gnome-keyring-xml/ I'll come back later on my feeling about Fedora 9, let's use it a bit...

I bought the Gnu Linux Magazine / France on Mail server but it was a big disillusion :( Usually those magazines are very nice and full of good tips and tricks. But not this time, I was expecting to find a lot of tools to fight spams... but the only topic related is MailScanner (which is a very good product that I use daily). The only MTA reviewed is exim, nothing about postfix, sendmail, qmail... for a special number it's a bit too few. The first 19 pages (of 70) are only related of theory rfc's and mime, maybe too much... Something I regret too is that at the end of the magazine there are articles about Xen, Zone0 and Jabber, I think the following topics would be nicer : - greylisting - sare - mailwatch (very nice frontend for mailscanner) - ocr for spams So nothing really new in that magazine, my notation is 3/10

Gnome gvfs a step behind ?

Today I had a bad surprise, at one customer, deploying Linux on desktop, they had some issues with samba shares access: no more shortcuts in places menu for the samba shares. This was due to the update of ubuntu from gusty to hardy. The problem is that now nautilus 2.22 is provided and this release use gvfs instead of gnome-vfs. Before that upgrade we decided to add some "share access" via gconf, this was perfect as it was added in /etc/profile. example : gconftool-2 --set --type=string /desktop/gnome/connected_servers/1/display_name 'public on samba' gconftool-2 --set --type=string /desktop/gnome/connected_servers/1/icon 'gnome-fs-smb' gconftool-2 --set --type=string /desktop/gnome/connected_servers/1/uri "smb://domain;$USERNAME@samba/public" This is not more possibe :'-( Ok let's try then to use bookmarks... but the problem is that the login is not used even if forced when the share is also public. The customer use a big public folder and acl's. So the only solution I had was to setup the share with to make it works and request a login and password. For massive desktop implementation, I preferred the gconf medthod. Maybe somebody could hack gvfs to force a user even on a public share.

This is the cover of my first book : 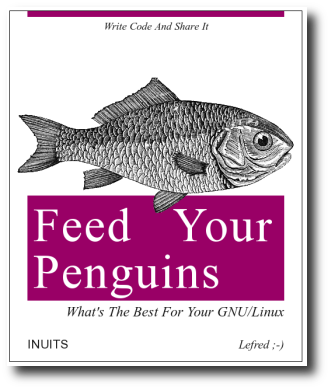 Feel free to create your own on O'Reilly Maker

Since always, I believe that the best way of educating people to use and think opensource, this should happen early at school. M$ knows that and since long time now they provide computers for schools, adult users of tomorrow are the children of today. M$ now starts even earlier, look at this ! Bah... I've already a bunch of books with penguins for my daughter ;-)

I've tried today to use audacity for the first time since I'm using Fedora 8. What a disappointment: no sound !

I checked in preferences and none of these options were working :

I started then audacity using the following command line : $ pasuspender audacity I could consequently hear some output and many different sources in preferences :

I've tested last night two proxies for MySQL : MySQL-Proxy and Dormando's Proxy for MySQL. Both are working, but I still don't see really the advantage of using DPM over MySQL-Proxy, maybe I should make more tests but deploying MySQL-Proxy was easier as you define the backends as arguments in command line. I plan to use a MySQL proxy in production as load-balancer in combination with replication and redirect all DML queries to the master. Does one of you already use one of those two projects in production, what's your feedback ? You can also find more information on DLM here. It would be maybe nice to have a kind of buffer if for any reasons the backends servers are not responding ?

As I had to monitor some JBoss servers and as there are some memory leaks in the program, the monitoring in Nagios of the Garbage Collector is very important. I've found some jmx script on JBoss wiki, but I was not happy with it. So I rewrite it to use twiddle.sh with the attributes I needed. I had also to modify twiddle.sh to remove the logging capability (that was causing permission error) : # diff twiddle.sh twiddleFred.sh 58c58 < JBOSS_CLASSPATH="$JBOSS_CLASSPATH:$JBOSS_HOME/client/log4j.jar" --- > # removed to avoid log file JBOSS_CLASSPATH="$JBOSS_CLASSPATH:$JBOSS_HOME/client/log4j.jar" Those are the nrpe test I implemented : # check Perm Gen command[check_jbosspem]=/usr/lib/nagios/plugins/check_jbosspem 127.0.0.1 4 jboss.system:type=ServerInfo listMemoryPools "Perm Gen" 70 90 # check Old Gen (Heap Memory) command[check_jbossoldgen]=/usr/lib/nagios/plugins/check_jbosspem 127.0.0.1 4 jboss.system:type=ServerInfo listMemoryPools "Old Gen" 85 95

In this post I present my MySQL Swiss Army Knife, all the tools that make my life related to MySQL easier :-) - The first utility is of course the famous maatkit. I'll not describe here all the part of this toolkit, you will find a nice description on the website. but I want to underline the Table Sync that is very useful when you need to create a master/master replication without any downtime.
We use cookies on our website to give you the most relevant experience by remembering your preferences and repeat visits. By clicking “Accept”, you consent to the use of ALL the cookies.
Cookie settingsACCEPT
Manage consent

This website uses cookies to improve your experience while you navigate through the website. Out of these, the cookies that are categorized as necessary are stored on your browser as they are essential for the working of basic functionalities of the website. We also use third-party cookies that help us analyze and understand how you use this website. These cookies will be stored in your browser only with your consent. You also have the option to opt-out of these cookies. But opting out of some of these cookies may affect your browsing experience.
Necessary Always Enabled
Necessary cookies are absolutely essential for the website to function properly. These cookies ensure basic functionalities and security features of the website, anonymously.
Functional
Functional cookies help to perform certain functionalities like sharing the content of the website on social media platforms, collect feedbacks, and other third-party features.
Performance
Performance cookies are used to understand and analyze the key performance indexes of the website which helps in delivering a better user experience for the visitors.
Analytics
Analytical cookies are used to understand how visitors interact with the website. These cookies help provide information on metrics the number of visitors, bounce rate, traffic source, etc.
Advertisement
Advertisement cookies are used to provide visitors with relevant ads and marketing campaigns. These cookies track visitors across websites and collect information to provide customized ads.
Others
Other uncategorized cookies are those that are being analyzed and have not been classified into a category as yet.
SAVE & ACCEPT